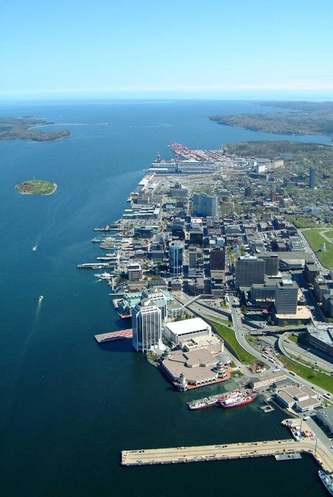 (Foodinista, 2011) This photo highlights the natural landscape of Halifax. On the right, you can see the downtown core of the city and its port on the Halifax Harbour. The Halifax Harbour is the defining feature of this region. On the left, you will see Georges Island, a small, partially submerged drumlin. Notice that the land that the city has been built on is flat, for the most part.
Halifax's natural landscape is characterized by rolling hills, exposed bedrock and the Halifax Harbour. "Halifax is located along a rugged, low relief fjord coastline, created as post-glacial sea-level rise drowned glacially modified river valleys." (Province of Nova Scotia, 2013) The two prominent types of depositional features that can be found in Halifax today are drumlins and till plains. (Province of Nova Scotia, 2013) These features are a product of glaciation. Let's explore events that have contributed to Halifax's natural landscape today.

"Millions of years of erosion have reduced the Appalachians' once-jagged peaks to rolling mountains and hills. In recent geologic times, glaciation played a part in this erosion, grinding down the peaks and separating the hills and mountains with wide glacial valleys. During the last ice age, the weight of the ice pressed the Appalachians down. As the land sank and the ice melted, the small inlets along the east coast were flooded by the sea. The long bays that were created form a "drowned coastline". These long bays have provided deep harbours for ocean freighters, and some have become the sites of major cities." (Making Connections: Canada's Geography Second Edition, 2006)

The area surrounding Halifax Harbour is an ideal site for a building city. It was chosen for settlement by native peoples and Europeans because of the region's geological attributes. Halifax Harbour is one of the world's largest and deepest natural harbours, and was valued as a resource, transportation method, and strategic site. "The Port’s strategic location made Halifax an ideal Gateway into North America for settlers and shippers and a perfect vantage point for military operations." (The Halifax Port Authority, 2015) "The Port of Halifax has remained a cornerstone of economic activity for the city, the region and the province as a whole." (The Halifax Port Authority, 2015)

Other defining features that were helpful to the development of the city include nearby landforms and bodies of water. Georges Island is a small, partially submerged drumlin located within the harbour. Citadel Hill is a drumlin on land. Both landforms were significant reasons why this site was chosen for garrisons and military bases, providing protection safely inside the harbour and higher grounds for a sweeping view of the harbour. (Province of Nova Scotia, 2013)

Additional features include; McNabs Island: the largest island located at the mouth of the harbour and a popular tourist attraction, and the Bedford Basin: an extension of the Halifax Harbour, also home to several islands.

Although fitting for settlement, the landscape might present challenges. Coastal cities are vulnerable to extreme events that may come with climate change (See Climate for more information about the potential impacts of climate change on Halifax.)

Nevertheless, Halifax's natural landscape and location relative to the Halifax Harbour are assuredly optimal conditions for a military base or city, (both of which the land has been used for) and have been essential to the development of the city as we know it today. Halifax is situated in the heart of several unique physical features and therefore has a distinct natural landscape.