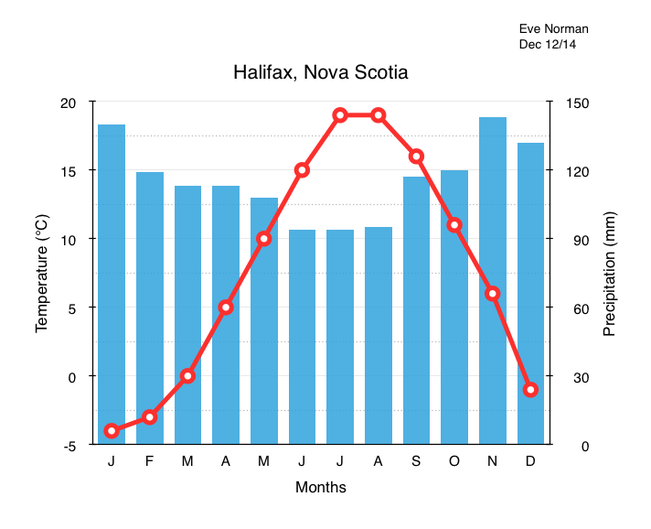 Halifax's climate is moderated by the Atlantic Ocean because it is situated on its coast. Water heats and cools slower than land, therefore places near to large bodies of water experience a lag in temperature change. These climate regions have a smaller temperature range and experience less dramatic weather changes throughout the seasons. Cold winter waters cause cooler air masses to form above Nova Scotia, cooling the land below. This is how the ocean moderates the harsh temperatures of summer. Warm summer waters cause warm air masses to form above Nova Scotia, heating the land below. This is how the ocean moderates the harshness of winter. These moist air masses are the reason for precipitation in the area. Other contributing factors to climate are the ocean currents. Canada's Maritime provinces are located in the area of the Atlantic Ocean where the warm Gulf Stream (flowing South to North) meets the cold Labrador Current (flowing North to South). Where warm and cold air masses collide, you will experience cyclonic precipitation as well as fog. (Ms.Lee, 2014) This is a reason why Halifax experiences over 100 days of fog or mist, and other precipitation throughout the year.

In 2003, Hurricane Juan reached Halifax, Nova Scotia. It was the first direct hit that the city had suffered in over one hundred years. The hurricane claimed eight lives, caused extensive damage, left over 300,000 homes without power and blew down millions of trees province wide. (CBC News, 2013) As a result of its location on the coast, Halifax vulnerable to severe weather such as hurricanes. The Gulf Stream is a known hotbed for the formation and strengthening of hurricanes along the coasts which it runs along. Southern Canada has the potential to experience dying Atlantic hurricanes as The Gulf Stream carries warm currents from the tropics Northward. Halifax and other Pacific coastal cities are more likely to suffer these storms because their climate is effected by the Gulf Stream. Although by the time the storms reach Canada, they are significantly weaker and continue to weaken over land so the risk for severe hurricanes is low.

Climate change is predicted to have numerous socioeconomic and environmental impacts on Halifax. An anticipated impact of climate change is changes to human health; an increase in injury, illness and disease due to extreme temperatures, extreme events, air pollution and increased levels of UV radiation. Changes will occur in the city's transportation and port operation due to climate variability and rising sea levels. Increased damage to port infrastructure from extreme events is expected, as well as changes to shipping routes as a consequence of variability in sea levels. Rising sea levels are also predicted to expose coast to wave action, intensify erosion and therefore result in receding of the coastline. This will change current flood patterns, it is likely that storm surges will inundate agricultural land (changing total acreage) and areas that had never been flooded before. (Climate Change NS, 2014)

The quality of surface and underground freshwater supplies may decline from more abundant but less frequent precipitation, flooding, saltwater intrusion, pollution, runoff, decreased flow and evaporation: effecting the availability of water safe for varying purposes. Any changes in water resources will threaten the ability to sustain the fragile life of ecosystems in Nova Scotia. Changes in temperature, precipitation and sea level will cause effect the population, distribution and migration patterns of native wildlife. In consequence, fish stocks, and industries such as fishing, hunting, tourism, oil and gas, and marine transportation will be threatened. There will be less availability of water for irrigation to support the lengthening growing season. Rising temperatures will eliminate possibility of growing heat sensitive crops or plant species (change diversity of crop types), and provide a favourable climate for pests, mold, weeds and the spread of disease in and above water. Forest fires during hot, dry periods and violent storms will threaten forestry in Nova Scotia. (Climate Change NS, 2014) In conclusion, climate change will have serious impacts on Halifax and its surrounding area.

How will Climate Change impact Halifax Over The Next 65 Years?

(Halifax Department of the Environment, 2015)