Halifax has a population of 409,000 people. (The Halifax Index, 2014) By looking at the graph below, you will notice that in each age group from 25-29 years onwards, there are more females than males. Similar to the breakdown of the total population in Canada, the majority of the population is female. The 65 and above age group accounts for the smallest percentage of the population, and is smaller than the 20 and under age group even though it has a larger age range. Halifax is home to mostly working age citizens (ages 15-65).

(City-data.com, 2011)
Throughout history, most of Halifax's growth has come from immigration. During the war of 1812 and in the years that followed, thousands of escaped slaves fled to Nova Scotia. Other individuals of African descent came to Halifax as slaves or seeking a new homeland. (Canadian Museum of Immigration at Pier 21, 2014) Many immigrants to Halifax between the 1990s and first decade of the 2000s came from Asia and the Middle East. (Government of Canada, 2014) In more recent years, immigrants originating from Europe, Asia and the Americas have been plentiful. The majority of people living in Halifax are English or French speaking, and Catholic. Below is a more in depth breakdown of the ethnic composition of Halifax. (CMHC-SCHL, 2014) 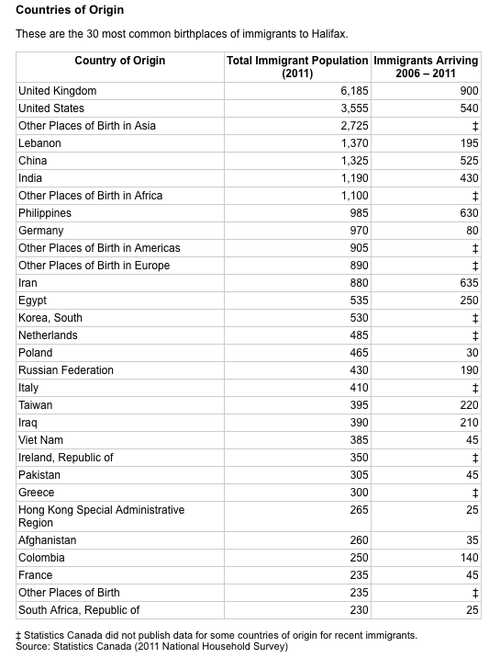 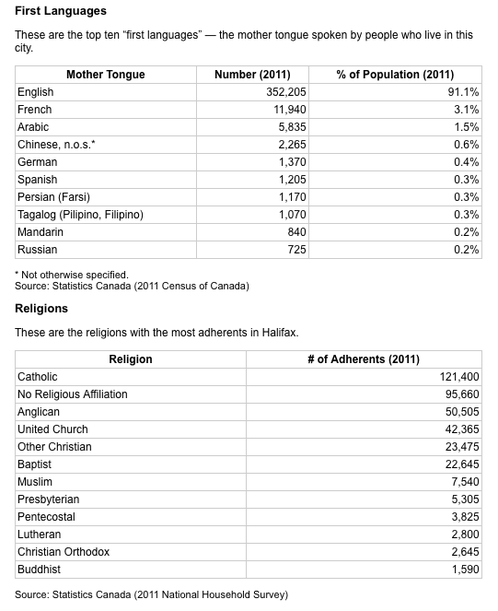 (CMHC-SCHL, 2014)
Today, Halifax faces the issue of a declining population and suburban sprawl. "Between 2001 and 2013, net migration accounted for 2/3 of Halifax's population growth." (The Halifax Index, 2014) "Immigration to Nova Scotia’s biggest city hit an eight-year low last year, while outmigration to other parts of Canada spiked to its highest level in over a decade." (The Canadian Press, 2014) More and more people are packing their bags for Western provinces such as Alberta to live and work. (Halifax Media Co-op, 2013) Fiscal sustainability is threatened by weak population growth, emigration, and outmigration and Halifax is working on a plan to avert it: it must attract immigrants, youth, and encourage students to stay after graduation to build its population. (The Canadian Press, 2014)

"The biggest problem with respect to population growth for Halifax and Nova Scotia has been outmigration to other parts of the country. In 2013, 2,100 Halifax residents left the province for other Canadian communities. New entrants to the labour force, new graduates, and other young Nova Scotians, account for a disproportionate share of this exodus. In 2013, Halifax residents between the age of 20 and 39 accounted for 45.3% of interprovincial out migrants but accounted for only 21.2% of the Halifax population. The parents in this age group also take their young children with them, and children under the age of 15 accounted for a further 29.5% of interprovincial out migrants last year." (The Halifax Index, 2014)

Halifax is a hotbed for post secondary students, "in five years, the number of international students studying in Halifax more than doubled to over 5,000 in the 2012-13 school year." (The Halifax Index, 2014) Yet, few students remain in the city to work after graduation. Loss of young people from lacklustre labour market is a major contributing factor to outmigration. (Herald News, 2014) "Promoting the creation of entry-level employment opportunities for graduating students, both international and domestic, is a key step in retaining the region's youth and increasing the number of international students who become permanent migrants to the region."  (The Halifax Index, 2014)

The Halifax Regional Municipality (HRM) has a sprawl problem, covering almost the same land area as Prince Edward Island and seems to be spreading rapidly. Sprawl is characterized by low population density and single-use zones. This land use pattern causes separation of residential, commercial and industrial areas which are only reachable by car as opposed to diverse walkable neighbourhoods. Sprawl is problematic for a number of reasons. Firstly, it requires services to be spread across a large area amongst the same number of taxpayers and more infrastructure, increasing costs to taxpayers. "A recent study commissioned by the HRM shows that changing the urban growth target from 25% to 50% of the population increase would save the municipality $1.7 billion over the next 20 years. In other words, to continue to service sprawl, the HRM will either have to charge higher taxes, or decrease service levels just to break even." (Spacing Atlantic, 2012)

Urban sprawl impacts the quality of living in the city. The HRM is not walking friendly and because of the distance between amenities and housing, citizens require cars outside of the downtown core. The number of cars on the road contributes greatly to gridlock (imposing economic costs), reliance on fossil fuels, and air pollution. Other environmental problems that are associated with sprawl are loss and degradation of green space and water resources. Social problems that have arisen from sprawl include disconnection, loss of community and diminished social services. (Spacing Atlantic, 2012) That concludes some of the impacts of sprawl that shall arise if it continues, making living in Halifax less desirable.

In my opinion, it is essential to the growth of Halifax for development of the downtown core. It is time that Halifax increase its population density per square kilometre. "Denser cities avoid many of the problems created by sprawl, as detailed above. Municipalities are able to keep costs (and taxes) down by providing services over a smaller area. More walkable cities avoid many of the costs of gridlock, and reduce air pollution and greenhouse gases. Wild spaces and water can be preserved, providing habitat for wildlife, as well as recreational opportunities for people.  [...] Denser cities often provide tighter, more closely knit communities and neighbourhoods." (Spacing Atlantic, 2012) Higher density areas also support local businesses, transit use and vibrant streets. In short, building upwards instead of outwards, and residences near shopping, dining and more will attract people to move to live in Halifax.

Finally, Halifax's weak population growth will jeopardize future success. To avoid the negative impacts of urban sprawl, Halifax must increase its population density rather than expand suburban area.
Powered by