Recreation and Cultural Activites in Halifax

Other large annual events include festivals of the arts like the Halifax Jazz Festival and the Halifax International Busker Festival: the largest and oldest live performance festival of its kind in Canada featuring performers from across the globe.  Halifax also celebrates people of all religions, cultures and sexual orientations. Multifest brings tens of thousands of patrons together to experience the city's various cultures each year. The Pride Festival in Halifax is the 4th largest in Canada. Once a year in the summertime, the pride parade fills streets as people of all genders come from near and far to participate. Streets come alive again in the winter for the Holiday Parade of Lights to kick off the holiday season. 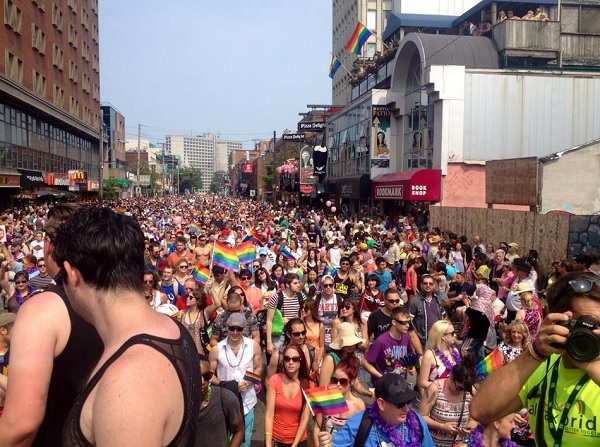 (Stoo Metz, 2014) Atlantic Canada's largest pride festival!
Tourists travel to Halifax to experience its beautiful landscape and many attractions. Doors Open Halifax is to spark interest in the city's built environment. For one week, free access into historical, contemporary or architectural buildings not usually open is available to the general public. Tourists and citizens alike enjoy visiting sites such as Halifax Citadel National Historic Site of Canada, a historic British fort and the Maritime Museum of the Atlantic to indulge in the rich history of the region. Other popular attractions include taking short road trips to nearby destinations such as the small historic/fishing towns of Peggy's Cove, Lunenburg, Fisherman's Cove and Dartmouth.

(TIANS The Voice of Tourism, 2013) Sailing in Halifax Harbour
Natural attractions and outdoor activities near the water also draw many to the city. Sport fishing, whale watching, and sailing are common regional activities. Within hours of the downtown core, several beaches are open to water-based recreation. Take a ferry to McNabs island and tour the largest island in the Halifax Harbour! Halifax is characterized by its location on the water, this is the most significant asset of the tourism industry in the region.

Don't panic! Experience the great outdoors on land! Halifax offers great walking, hiking, and biking paths as well as camp grounds for all. Sprawling parks, lakes and stunning towns with plenty of character (as seen on the provincial map) within the province make for excellent sightseeing during day trips when visiting Halifax. You need be on water to take in the natural beauty of Halifax. The possibilities are plentiful in Halifax, conclusively, there is an event or attraction for everyone.