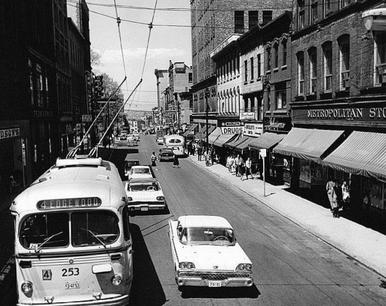 ﻿(Ross Dunn, 2013) A historic photo of downtown Halifax, taken in the 1960s﻿
Human settlement began in Halifax approximately 13,000 years ago, when early settlers known as the Mi'kmaq people moved into the Nova Scotia area to hunt caribou. The Mi'kmaq people moved inland from the coast with the winter season to hunt game when the fishing season had ended. Because of this they did not establish permanent settlements.

The British government sponsored the first settlement plan to work towards a present-day Halifax, in 1746. The plan was undertaken for the main purpose of exploiting the abundance of cod in the region as well as to offset the presence of the French military in Louisbourg. Within the years that followed, Colonial Edward Cornwallis led about 2,500, mostly poor settlers that had been recruited from England to Chebucto. Chebucto had been selected as the area of settlement due to its fine harbour; ice-free and the second largest in the world. It was later renamed Halifax after the mastermind of the settlement, George Dunk, Earl of Halifax. Before winter, hardly any houses had been completed despite having plenty of free building lots. Some settlers stayed aboard ship, died or left for nearby US destinations. Although there were struggles such as these which made establishing a colony difficult, merchants from New England came in search of a better life. Within the year, essential buildings had been completed and to boost the population, German settlers had been recruited and given land nearby the town. (The Canadian Encyclopedia, 2014) The Town of Halifax was established on June 21, 1749 and was declared as the capital of Nova Scotia on July 14 of that year. (Natural Resources Canada, 2014)

The Mi'kmaq believed that the English had settled on their land without permission, therefore relations between the groups were strained. Disagreements over land use and authority drove the natives to declare war on the English in 1749. The French at Louisbourg aided the Mi'kmaq with weapons and money, fuelling the war. In 1751, they successfully raided Dartmouth, a community of Halifax. (The Canadian Encyclopedia, 2014)

In 1755, the English deported descendants of the French who posed a potential threat. By deporting the Acadians, and capturing Ile Royale and Ile Saint-Jean, the English had ended the influence of the French over the region. Mi'kmaq chiefs signed a peace treaty with the English officials in 1761 once they were left to fight the English without the assistance of the French. However, although peace had been made between the two groups, the American Revolution (1775-83) brought British loyalists to Canada and led the English to fortify its military in Halifax. A combination of these factors allowed the English to have more power over the Mi'kmaq people, who soon were dispossessed of what land they had left. The British were no longer threatened by the French or Mi'kmaq people, and engrained a solid presence in Halifax and its surrounding area. (The Canadian Encyclopedia, 2014) Halifax was established as a city in 1842 and reached a population of over 20,000 by 1851. (Macalester College, 2014)

By the mid to late 1800s Halifax had made major developments as a city. The city had its own electric streetcar system and city hall. It's harbour was busy and trade between the United States and Europe was prosperous. The fishing industry was one natural resource based industry that contributed to Halifax's economy at the time. The Canadian government officially took control over the army and naval base from the British in 1906. (Macalester College, 2014)

In 1917, the city was booming and was the largest city in Atlantic Canada. Acting as an important naval base during both World Wars, situated in a natural harbour, Halifax served as an excellent location for ally ships retrieve supplies or to anchor until they were able to safely cross the Atlantic Ocean to Europe. (Macalester College, 2014) In December 6, two ammunition ships collided in the harbour causing the largest man-made explosion at the time. This tragedy shook Halifax, killing over 2,000 people. It took several years to recover from the millions of dollars in damages. The Halifax explosion is a significant part of the city's history which took place in the Halifax Harbour. (The Halifax Explosion, 2014) 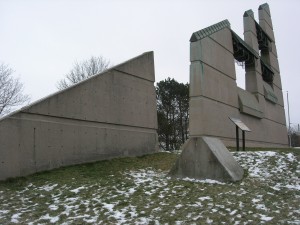 (Carly Wilkie Steven, 2010) The Halifax Explosion Memorial Bell Tower on Fort Needham
In contrast, present-day Halifax is a historic port city and has long since recovered from the devastation of the explosion in 1917. Halifax no longer serves purpose as a wartime naval base, but it's history as so lives on and the Halifax Harbour area remains an important Canadian Forces Base. Fish stocks collapsed in the 1990s and the Canadian government implemented a moratorium on fishing. (Making Connections: Canada's Geography Second Edition, 2006) Finally, scientists are beginning to see signs of fish stocks replenishing on the East Coast of Canada. Fishing continues to be a major primary industry of Nova Scotia. The population of Halifax is now over 400,000 people, and still the largest city in Canada's Atlantic provinces. (Encyclopedia Brittanica, 2014) Halifax has a plenteous history which has shaped it into the great Canadian city that it is today.